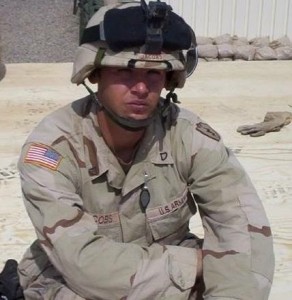 In early 2003, Specialist Bryant Jacobs joined the Army, wanting to serve his country in response to the terror attacks of 9/11. He received basic training and his advanced training at Ft. Leonard Wood, MO, and became a Combat Engineer.

By August of 2003, he was stationed at Scofield Barracks, HI and, he deployed to Iraq in January, 2004.  At that stage of the war, combat was frequent and heavy.  His unit searched for improvised explosive devices (IEDs) in an effort to clear routes and for arms caches, ammunition dumps, and anything else that could be used against U.S. troops.

On December 3, 2004, Jacobs’s squad was out on patrol when a large IED exploded under his Humvee. Jacobs was blown out of the vehicle, landing face down on the ground and struggling to breathe.  He knew that one finger was missing, but he had no idea how badly he was hurt.  Squad members turned him over to find that his legs were shattered, and his lower torso sustained significant injury.  Jacobs was loaded into the back of another Humvee until a medevac could take him back to base.

Jacobs was placed in a medically induced coma for three weeks, and he was not expected to live to go home.  He underwent several surgeries to save his life, and over the next two years, he endured more than forty surgeries and endless therapy in an attempt to save his right leg and ease his pain.  However, after ten years, his right leg was still very painful and non-functional, so he made the courageous decision to have it amputated.

Jacobs, a Purple Heart recipient, volunteered for an experimental type of prosthetic that attached to the leg in a new way.  He was the second person to ever try the prosthesis, which was still in development, and in so doing, he helped pave the way for hundreds of amputees to live full lives.  He now golfs, substitute teaches, and refuses to take elevators.  Jacobs says, “I just want to give back for the help I have received. I want the veteran who is still having dark days to get the help I got.”  Bryant is now active in raising money for Building Homes for Heroes.

When asked if he has any regrets, he said, “My only regret is that I got injured on my first deployment. I missed out on some great experiences to further serve my country.”