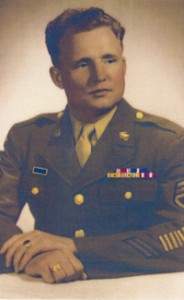 Goodliffe was drafted in April 1941 and arrived on the Philippine island of Mindanao in December. He was in a quartermaster, or supplies, unit, but he and his unit were soon cut off without food, and had to live off the land. On May 12, 1942, American forces surrendered, and Goodliffe was imprisoned on the island until October, when he was sent to the Davao Penal Colony. When the Americans began nearing the Philippines, the guards started loading the prisoners onto “hell ships” for shipment to Japan. Goodliffe didn’t reach Japan until September, and his boat was the last one to make it. The prisoners worked in a steel mill. It wasn’t long before U.S. planes came over and started dropping bombs on nearby targets. First they dropped flares, then firebombs, and finally high explosives. The surrounding area was devastated by firestorms and the death toll was high. The steel mill became an aid center.

The prisoners were told not to look up at the planes, but that only gave them confidence. One time Goodliffe, seeing no guards around, sneaked a peek over a fence to see a big fire burning at a gas depot. But he was spotted, marched into the middle of the compound, and beaten unconscious with a 2 x 2 board.

After Japan surrendered on August 15, 1945, planes dropped rations and newspapers for the prisoners. Goodliffe then weighed 83 pounds.

He eventually came back to Bushnell Hospital in Brigham City, and on April 2, 1946, he married the Army nurse who had helped him regain his health.