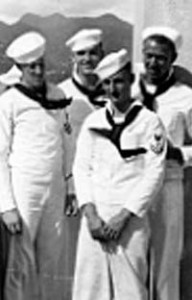 Art Buell enlisted in the Navy at age 17. He was aboard the maintenance ship USS Medusa at Pearl Harbor on December 7, 1941 where he witnessed the sinking of the battleship USS Utah during the Japanese attack. Following a year and a half of vital repair service at Pearl Harbor, he was assigned to a Navy landing craft in the spring of 1943. He was involved in two amphibious landings in the battle of the Solomon Islands near Guadalcanal. He later gained a naval commission, served on three destroyers, and in 1958 commanded the Naval ROTC program at the University of Utah.