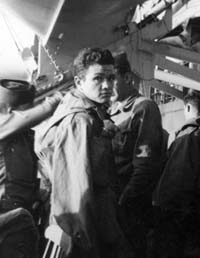 John Cole was called to active duty from the Marine Reserve in 1950 and assigned to the 5th Marine Regiment in northeastern Korea. In November, Cole’s unit was hit at Yudam west of the Chosin Reservoir by a massive Chinese onslaught in unimaginable 40-below-zero weather. Cole was wounded but continued to fight as the Marines battled through a gauntlet of enemy fire over a tortuous road to temporary safety in the encircled town of Hagaru. Cole was on the last medical evacuation flight to leave. For its action at Chosin and subsequent breakout to Hungnam on the coast, Cole’s lst Marine Division was awarded the Presidential Unit Citation. Cole was awarded with 3 purple hearts.