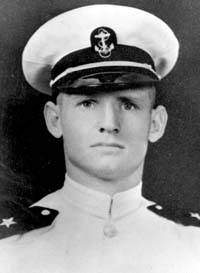 Frank C. “Red” Gilmore volunteered for the Navy and was on his way to the South Pacific when war with Japan ended in 1945. Five years later he was back in the air as a Navy pilot flying anti-submarine patrols and “Carrier On Deck Delivery” (bringing the precious mail) assignments during the Korean War. He served yet again during the war in Vietnam where he flew anti-submarine patrols during two cruises on the carrier USS Yorktown, once forcing a Soviet submarine to the surface. His last assignment as a naval officer was commander of the University of Utah Naval ROTC unit.