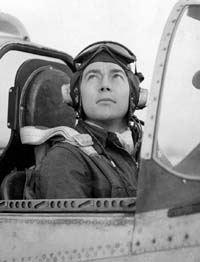 John Grimshaw enlisted as a youth during World War II and found his way into the Army Air Corps where he earned his pilot’s wings. He was assigned to the 364th Fighter Group. One of his first combat duties was to fly cover in his P-38 Lockheed Lightning over the French coast for the Allied armada on D-Day. During the summer and fall of 1944, he completed 67 missions in the skies over Europe, flying both the P-38 and the P-51 Mustang. Late in 1944, Grimshaw’s squadron of 12 aircraft engaged nearly 40 enemy planes over Germany where he shot down one enemy plane and damaged another.