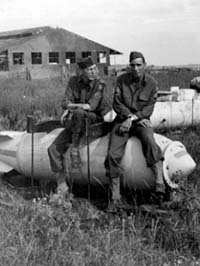 Ben Waterfield enlisted in the Army Air Corps, but extreme near-sightedness restricted him to a “no combat” role. In 1944, even though deemed unfit for overseas duty, he wangled an assignment in England with the secret 422 Night Fighter Squadron where he was an armorer for the P-61 Black Widow. Later that year he was based near the front lines in Belgium during the Battle of the Bulge where he often worked at night, holding a flashlight in his mouth. In a strafing attack by a German fighter, Waterfield was severely wounded by cannon fire. He was subsequently evacuated to Paris and later to Brigham City, Utah where he recovered from an amputated leg.