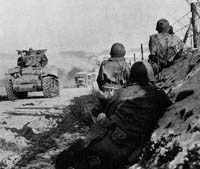 Clint Brewer enlisted in the Army in the late 1930s. At the outbreak of World War II, he was assigned to the 969th heavy field artillery battalion, whose large 8-inch cannons bombarded enemy strongholds. On D-Day, Brewer’s unit was thrown into battle at Utah Beach and dueled continuously with German ground units into the winter of 1944-45. Brewer and his fellow cannoneers were then transferred to General Patton’s 3rd Army and given the task of aiding in the rescue of U.S. units surrounded in the Battle of the Bulge. In one 48-hour period, Brewer’s unit and their heavy guns traveled 120 miles to surprise enemy forces in Luxembourg. Their skill and determination under extreme winter conditions were crucial to the survival of thousands of Allied soldiers.