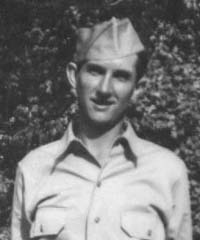 LaMar Day joined the Army in December 1943 and volunteered for extremely hazardous combat duty with the famous 1st Ranger Battalion known as “Darby’s Rangers.” One week after storming ashore at Italy’s Anzio beachhead in January 1944, Day and 400 Rangers were captured after a 12-hour battle against a German force of tanks, artillery and paratroopers. By their stubborn resistance, Day’s Ranger unit saved the beachhead from annihilation. Day was captured and imprisoned for 18 months before he managed to escape several times, but was always recaptured. He was freed by U.S. troops in May 1945.