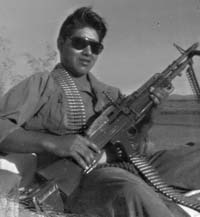 Ridley Eagle Chief, a full-blooded member of the Ute Tribe, was raised as a hunter, rancher and outdoorsman. He joined the Army and was assigned to service in Southeast Asia. He arrived in South Vietnam in November 1969 and was assigned to the combat engineers as a “sapper” who disarmed mines, booby traps and explosives. Eagle Chief experienced sustained combat in the Dha Trang region. He then volunteered to become a helicopter door-gunner with the 269th Aviation Company. Exposing himself to ground fire while providing cover fire for assaulting troops, Eagle Chief earned the Combat Infantry Badge and the Purple Heart.