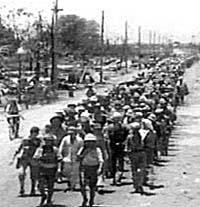 Gene Jacobsen enlisted in the Army Air Corps in 1940. He was assigned as a supply sergeant for a fighter squadron defending the Philippines. On December 8, 1941, the Japanese destroyed aircraft and vital equipment at Jacobsen’s airfield. Jacobsen was transferred to the infantry and assigned to the defense of Bataan. Despite a lack of food, weapons and other supplies, defending forces fought for months against overwhelming odds. Upon surrendering on April 9, 1942, Jacobsen and his comrades endured the infamous Bataan Death March followed by three-and-half years of brutal imprisonment, starvation, torture and disease.