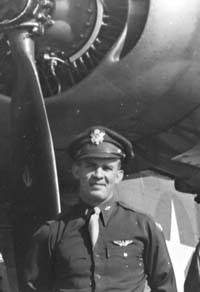 John Lindquist volunteered for military duty during World War II. He served initially with the 45th Infantry Division before qualifying as an Air Cadet and transferring to the Army Air Corps for training as a bomber navigator. In April 1944, he was assigned to the 493rd Heavy Bomber Group and flew his first mission on D-Day, June 6, 1944. Flying first in a B-24 Liberator and later in a B-17 Flying Fortress, Lindquist completed 35 missions over hazardous, well-defended targets throughout central and northern Europe. In December 1944, he volunteered for three additional missions to aid beleagured ground troops in the Battle of the Bulge.