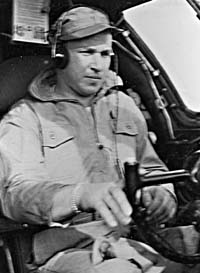 George Marquardt first saw Utah when he arrived at the remote Wendover Air Base to train for the most secret mission of World War II. An elite pilot for the super-secret 509th Bombardment Group, Marquardt’s group had been selected to drop the atomic bomb on Japan. On the fateful day of August 5, 1945, Marquardt was high over Hiroshima in a formation of three B-29s: his “Necessary Evil” and two others, “Enola Gay” and “Great Artiste.” Banking away from the others into a 360-degree turn, the crew of “Necessary Evil” filmed one of the most profound moments of the Twentieth Century. Marquardt later recalled: “When the bomb detonated…it seemed as if the sun had come out of the earth and exploded.” His plane circled the mushroom cloud three times before returning to Tinian Island.