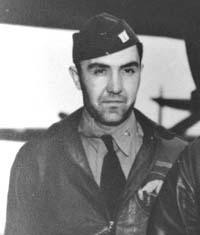 Chase Nielsen enlisted in the Army Air Corps and was trained as a pilot and navigator. Shortly after Japan’s attack on Pearl Harbor, Nielsen volunteered for a top-secret mission. On April 18, 1942—after weeks of instruction and less than five months after Pearl Harbor—Nielsen’s plane and 15 other B-25 bombers were launched from the deck of the USS Hornet for a daring raid on Tokyo. The attack was successful, but Nielsen’s crew crash-landed off the coast of China. He was captured with seven other Doolittle’s Raiders. Nielsen was sentenced by the Japanese to life in solitary confinement and was imprisoned for 31 months of torture, starvation and isolation until liberated by U.S. forces. After the war, Nielsen flew for the Strategic Air Command.