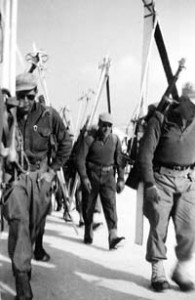 Jim Powell learned to ski as a youth at Sun Valley, Idaho. When he volunteered for the Army’s 10th Mountain Division, he was selected as a ski instructor for duty in Colorado. After months of training, Powell and his comrades arrived in Italy in January 1945 where they were immediately thrown into winter combat as infantrymen. In early March, during a firefight with German troops, Powell was hit by a bullet that passed through his throat. He was first given up for dead, but later recovered and returned to combat duty. He is the recipient of the Purple Heart.