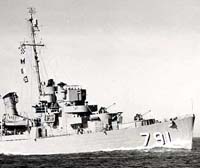 Melvin Odekirk entered the Navy in 1937 and trained as an engine specialist for naval vessels. Assigned to the crew of the USS Carina, Odekirk saw his first combat off Guadalcanal in 1942. He was later transferred to the Atlantic Fleet aboard the destroyer escort USS Maloy. On D-Day, June 6, 1944, the Maloy was assigned as headquarters ship at Omaha Beach. Odekirk’s ship bombarded the beaches in support of American soldiers fighting their way ashore and at one point shot down an attacking German twin-engine bomber. During the following weeks, Odekirk and his fellow crewman patrolled the French coast, engaged German submarines and torpedo boats, and captured an enemy-held Channel island.