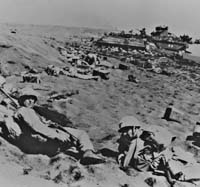 Keith Renstrom followed in his father’s footsteps to the Marine Corps in 1940. He was serving in Iceland when Pearl Harbor was attacked and was sent back to the United States to train Marines for combat. Later, as a gunnery sergeant, Renstrom led troops ashore during fierce and costly amphibious assaults in the Marshall Islands and at Saipan, Tinian and Iwo Jima. One Marine history book quotes a comrade of Renstrom’s as calling him “a Marine’s Marine,” and saying, “Our company would have gone to hell and back for this guy, and we did.” Another marveled at his personal conduct and remembered “a gunny who didn’t smoke, drink, swear or chase women!” Renstrom served six years in the Marine Corps.