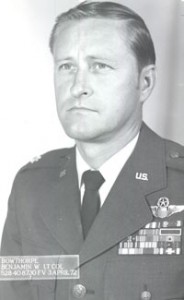 Ben Bowthorpe enlisted in the U.S. Air Force on March 5, 1953 as an airman.  He was commissioned as a 2nd Lieutenant in June 1955 and joined the 334 Tac Fighter Squadron.

During a mission over North Vietnam in 1966, Bowthorpe was the flight commander of a four-plane formation to bomb a target about 50 miles west of Hanoi.  As they got close, they descended to 500 feet to fly below enemy radar.  When they were 10 minutes from the target, Bowthorpe’s plane was hit by ground fire and the rear of his aircraft ignited. His wingman told him that the fire in the tail end was growing and urged Bowthorpe to bail out. Bowthorpe decided to take his chances with his damaged plane rather than risk death on the ground or imprisonment in the “Hanoi Hilton.” With the target in sight, Bowthorpe successfully dropped his bomb load.  He then gained a little altitude and tried to make it to Udorn AFB in Thailand. Once close to Udorn, Bowthorpe instructed his wingman to land first, while Bowthorpe circled the field. Although he had extremely limited braking ability, Bowthorpe landed his shot-up F-105 safely and the drag shoot deployed, bringing the plane to a stop.

Bowthorpe has been honored with an exhibit at the USAF Museum at Wright Patterson AFB in Dayton, Ohio, as the first fighter pilot to fly 100 missions in the F-105 Thunderchief over North Vietnam. When asked about his time in service, he says, “I took a tremendous amount of pride in being in the military and serving my country.  I loved my job and believe that I was very, very good at it.  My life in the military allowed me to make lifelong friends who became my extended family.”