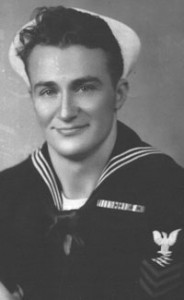 Don Bush was inducted into the Navy in May 1943. He was in a Joint Assault Signal Company (JASCO) assigned to the USS Cavalier. The JASCO aided Marine units on beach assaults as needed. Bush became the leader of his team, which included five radio men and five signal men.

Bush’s men helped the invasions of both Saipan and Leyte, where fighting was fierce and difficult due to the dense mountainous forests where the enemy hid.

The USS Cavalier was targeted a number of times. It escaped two bombs intended for it that landed on either side of the vessel, and a Japanese suicide plane that crashed into another ship in their convoy, killing 54 men aboard. The Cavalier would have been hit, had the other ship not exchanged places with it during a nighttime transition.

On January 30, 1945, a torpedo struck the Cavalier, injuring 50 men. The ship stopped dead in the water—its engines and power ruined, propeller destroyed, and a five-foot gash in its side causing the engine room to flood. In mid-March, a tug boat began towing the crippled ship 5,000 miles back to Pearl Harbor. The trip took until May.

After a stint with his team in Sasebo, Japan, Bush was separated from the service in March 1946 as a First-Class Petty Officer (E-6). Bush was called back in 1952 to go to Korea. While on active duty, he again served as a radioman off the Korean coast on a Landing Ship Tank. His position called for three radio operators but he was the only one on the ship so there were times that he had to pull 24-hour duty.

Bush is most grateful that none of his own JASCO team was killed during the time they served together in WWII. Even now, whenever he hears “Taps” played, he thinks of those 54 men aboard the lead ship that was hit, and how close his own team came to destruction