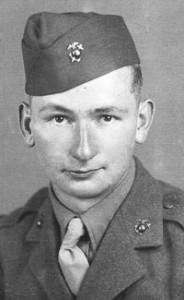 John Delliskave was drafted in 1944, leaving behind the family farm, his expectant wife and two children. He chose the Marine Corps and was assigned to L Company, 3rd Battalion, 21st Marine Regiment , 3rd Marine Division.

Delliskave’s first experience with combat was the Battle of Guam. The Japanese were entrenched and difficult to find. When Delliskave landed on Guam he found burning campfires just left by retreating Japanese soldiers. There were skirmishes and firefights as the 3rd Division worked its way north. The island was secured on August 8th. Delliskave describes Guam as a “cake walk” compared to his next battle.

Iwo Jima, an island of only eight square miles, would soon have 61,000 Marines fighting 22,000 deeply entrenched Japanese soldiers. Delliskave’s regiment, the 21st, was assigned to go ashore on D-Day +1 on Yellow Beach 1 and 2, take Motoyama Airfield 1, then turn north and take part of Motoyama Airfield 2. These airfields were on flat ground with Mt. Suribachi overlooking them. After one failed attempt, the landing was made on the next day. Delliskave’s regiment was heavily opposed.

As the platoon fought toward the airfields, they took artillery shelling from Mt. Suribachi while encountering enemy machine gun nests. In one incident, Delliskave found himself staring at an enemy soldier pointing a Nambu Heavy Machine gun at him. Both went to aim and shoot, but the enemy had stuffed a rag into the barrel and had to remove it. Delliskave opened fire and took out the nest, saving his platoon.

At another point in the 35-day battle, Delliskave was alone in a shell hole when a previously hidden Japanese tank came by and was behind the lines. Despite drawing attention to himself, Delliskave jumped out of his hole, calling to fellow Marines, who fired and stopped the tank. At night, enemy soldiers were so close that Delliskave could hear their conversations.

Delliskave was one of only eight of his platoon members to survive Iwo Jima. Even after he was pulled out, he was called to go back to take a hidden pocket of resisters. Fortunately, this second tour was brief and uneventful. Delliskave then returned to Guam to train for the invasion of mainland Japan, but the war ended and he was sent home to his wife and three children, one of whom he had yet to see.

Of his time in service, Delliskave notes, “I was there to do a job that had to be done. America is the greatest country in the world. I love the flag and I fly it all the time.”