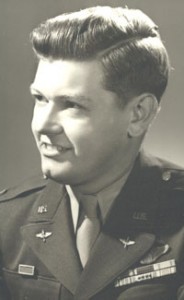 Dick Coleman was born in Fort Wayne, Indiana. Following his junior year at Purdue University, Coleman took advantage of a deal to sign up for the Air Corps and get paid $1,000 for each year he served.

Coleman was at Kelly Field for advance training on an AT-6 when Pearl Harbor was attacked. He earned his wings and a commission as a 2nd Lieutenant in January 1942. In the spring of 1943 he volunteered for multi-engine transition and was assigned to the 451st Bomb Group, 726 Squadron of the 15th Army Air Force. He was sent to Europe in November 1943, piloting a B-24.

His group flew missions out of their airbase in Gioia del Colle, Italy. On his 10th mission, flak from enemy fighters severed the fuel lines directly behind Coleman and his co-pilot, spraying them with fuel amidst flames. His tail gunner had been killed and Coleman gave the bail-out command.

Coleman and all but three men were taken captive by Germans. While waiting to be taken to a hospital, he happened to see his reflection in a mirror for the first time since the firefight. The skin on his face was so burnt that it had curled up like thick black hair, and he hardly recognized himself. After two stops at German hospitals, he was shipped with about 400 others by train in cattle cars to Stalag Luft 3. It was April 1944.

In January of 1945, all prisoners were ordered to march to Spremberg. From there, the POWs were jammed into cattle cars and taken by train to Moosburg, home of Stalag 7a. It has been estimated that about 130,000 prisoners were sent to that camp, which was designed to hold 14,000. In April—a year after Coleman’s capture—Patton’s 3rd Army liberated the camp. General Patton himself came to the camp and was greeted with great enthusiasm.

Coleman and the other liberated prisoners were transported to France. The C-47 he was in ran out of fuel and had to crash-land on a small airfield. The men were deloused, issued new uniforms and loaded onboard the Hermitage to Boston.

Back in the U.S., Coleman finished his engineering degree at Purdue, got married, completed two master’s degrees and went to work for the Public Health Service.

When he retired from the Public Health Service, he moved back to Salt Lake City, where he remained active in the Masonic Fraternity, the Kiwanis Club, Salvation Army and as a volunteer at the VA Medical Center.

Coleman passed away just short of his 91st birthday, on September 3, 2011. His family accepted the award on his behalf.