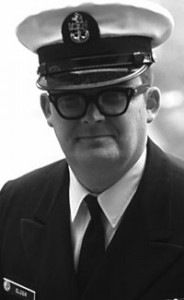 Rus Elder was born in Illinois and enlisted in the Navy in 1954 as a photographer’s mate. He was trained in the shooting and editing of motion pictures, shooting and processing color photos, and in aerial mapping. He was assigned to the USS Independence in 1961, and then transferred in 1964 to the Pacific Fleet Combat Camera Group headed for Vietnam.

Elder covered Navy Sea Wolf operations from the HU1 (Huey) gunships, often drawing enemy fire. He also documented the war from River Patrol Boats in the Delta while dodging rocket fire and floating mines. One time, rockets hit their river boat, which caught fire and began to sink. The commander headed for the beach while Elder moved the ammunition to the front of the boat, getting badly burned. Once beached, Elder stood guard at the bow despite his injuries.

Elder signed up for a second tour in October 1968 as a senior photographer. He was stationed in Da Nang and given permission to spend time with every detachment in I Corps out in the field, including the Quaviet River close to the DMZ, and also with Explosive Ordnance Disposal.

Elder also did helicopter photographic surveillance for the Navy Seals just 500 feet off the ground. They were fired on heavily, one time sustaining 19 holes in their aircraft. While aircrews were firing grenades and machine guns, Elder was shooting guns and photos out the same door.

Elder earned a second Purple Heart when he sustained a wound in his right arm from an enemy bullet while on a swift boat at night. He was flown out in a medevac and spent six weeks in a Japanese hospital. He continued his Navy career with tours in Europe, Panama, and Naples, retiring as a Senior Chief Petty Officer.

Elder earned his master’s degree in photojournalism at Ball State and taught for 18 years at Northern Illinois University. When asked to sum up his years in the military, he responds, “I love this country and I am proud of it. We’ve done a lot of good things for people around the world. The years I spent in Vietnam were the most productive of my career.”