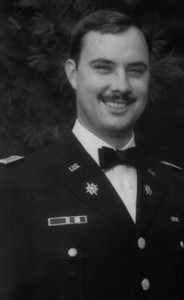 From 1979 to 1982 Scott Konopasek served with the 142nd Military Intelligence Battalion as an enlisted Arabic linguist and later as an officer. He attended the Counterintelligence Officers Course at Ft. Huachuca, AZ and was further assigned to the 513th MI Brigade at Ft. Monmouth, NJ. The 513th supports Army operations in South America and the Middle East, where his Arabic language skills were of great use. In this assignment he served as a platoon leader, assistant brigade S4 (Logistics staff officer), and as a battalion S2 (Intelligence staff officer).

After further professional schooling at the Military Intelligence Officers Advanced Course he was assigned to the 4th Battalion 43rd Air Defense Artillery in the Fulda Gap, Germany. He served as the battalion S2 during this period. In 1990 Konopasek moved to the famous 2nd Armored Calvary Regiment as the assistant regimental S2 and participated in Operation Desert Storm. Konopasek’s unit conducted reconnaissance ahead of the main armored forces to find and engage the Iraqi Republican Guard.

Konopasek separated from duty and from 1991-1993 attended the University of Utah where he received a degree in International Relations/Middle East Studies. He was awarded the additional specialty of Foreign Area Officer for the Middle East and North Africa by the U.S. Army. Currently Konopasek is the Salt Lake County Director of Elections, a position he has held since 2008.

Konopasek says that he learned great lessons from his experiences; namely, that he can overcome any hardship if he wants to and to “appreciate all the things you really have. All the things you would be complaining about at home become your greatest blessings when you don’t have them.”