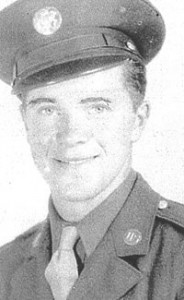 Shortly after his 18th birthday in 1943 RKay Mower joined the U.S. Army and was assigned to the 106th Infantry Division as a team leader for an 81mm mortar squad. In fall 1944, the division was deployed to England, and from there to St. Vith, Belgium.

On December 16, 1944, Mower and the 106th Infantry Division were on the eastern edge of the Ardennes Forest. “The weather was bitter cold and all was quiet,” says Mower. “Then the whole word exploded,” in what would come to be known as the Battle of the Bulge.

The German advance came intensely, but Mower continued to fire on the advancing army despite the incoming shells, bitter-cold weather and heavily overcast sky that limited Allied air support. For his valor in the weeks-long battle, Mower was awarded the Bronze Star.

On Christmas Day, Mower received severe internal injuries and had to be evacuated, but not before helping a fellow comrade retreat to the safety of the dense Ardennes Forest. After three weeks of recuperation in England, Mower requested to be sent back to the 106th Infantry Division. His request was denied and he was transferred to the Army Air Corps, where he was involved in the fueling of B26 bombers.

After victory in Europe he used his self-taught German language skills as Sergeant in Charge of kitchens at an air base in Landsberg, Germany.

Mower passed away on October 21, 2011. He was proud of his service and was happy to be recognized for it. His family accepted the award on his behalf.