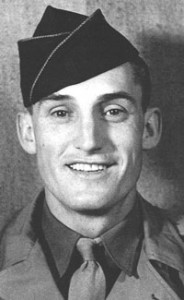 Poulsen was stationed in Harford, England, when the German invasion of France began. In 1944, he was sent to Normandy and assigned as a forward observer to the 204th Field Artillery Battalion—part of the 20th Corps of Patton’s 3rd Army.

In Granville, France, Poulsen was shot three times, but the hospital had so many casualties he had to be moved to a soccer field, where he was put in a six-man tent. While there, Poulsen was on the operating table when German aircraft bombed the area. The medical personnel fled and left Poulsen alone on the table. Luckily, his best friend rescued him from the bombing.

After recovering from his wounds, Poulsen spent approximately six weeks attempting to locate his unit, going from one replacement center to another. He returned to duty in mid-November. His artillery unit moved through France and into Germany. In 1945, Poulsen was one of 150 GIs, one from each battalion, selected to go home. On the return trip, the ship was fired on, and had to sail down past Cuba and Puerto Rico and then up the east coast to avoid submarines. Poulsen was discharged at Fort Sill on September 25, 1945, and returned to Salt Lake City.

Poulsen still proudly keeps his handkerchief with 204th FA’s motto: “Hell Has No Fire Like Our Fire.”