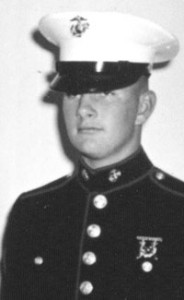 At 17, with the consent of his parents, Stuart Shipley enlisted in the Marine Corps and eventually served two tours in Vietnam from 1964 to 1968.

For his first tour, Shipley was deployed with the 2nd Battalion, 3rd Marine Division and later served in the 1st Battalion, 9th Marine Division. As part of a weapons platoon, he conducted night patrols as often as five times a week.

Shipley volunteered to return to Vietnam for a second tour, and served in the 3rd Battalion, 1st Marine Division. Throughout his service, Shipley saw many of his buddies wounded and killed by snipers, booby traps, and ambushes. On one patrol, he and three others were trapped by an explosive device and Shipley was the only survivor.

In February 1966, Shipley was involved in operation “Double Eagle” and was part of the attack on Marble Mountain. During the operation, he and his buddy were under fire from all directions. While returning fire from their bunker, Shipley’s friend was killed. Although he was trapped outside of his bunker, Shipley was able to return to safety.

Shipley originally enlisted in the Marine Corps to serve his country and help the Vietnamese people avoid communism. The reason for his second tour was to support his Marine buddies.

Shipley is a patriotic American, who reaches out to help of Vietnam veterans. He wants to remind today’s generation that freedom is not free; it has been paid for by thousands who have given their lives to defend it.