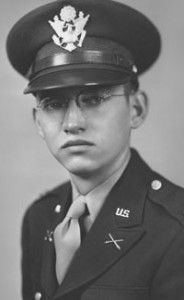 Winston Thatcher joined the Army in 1943. After completion of OCS training in Ft. Sill, Oklahoma, he was promoted to 2nd Lieutenant in the Field Artillery.

On May 1, 1944, after several stateside training assignments, Thatcher boarded a Liberty Ship en route to North Africa. This was no pleasure cruise – it took 31 days. Officers bunked three deep and the enlisted bunked five deep.

From the North African Replacement Depot, Thatcher was shipped to Italy and assigned to the 916th Field Artillery Battalion 91st Infantry Division.

On July 15, 1944, the 91st attacked north toward the Arno River and Thatcher got his first look at combat and his first glimpse of the Leaning Tower of Pisa (through binoculars). Operating as Forward Observer, Thatcher moved with the frontline infantry units and directed artillery fire in support of their operation.

Thatcher is especially proud of the 91st Division action in September 1944, when they breached the fortification of the Gothic Line. As he puts it, “It took the 91st only 12 days to breach the fortification that took Hitler a year to build.”

On one assignment near San Bianco, Italy, Thatcher was detailed as a forward observer. He and his party were positioned near a barn in the countryside, and he could see several American soldiers killed nearby. Thatcher and his team found that some Allied soldiers had gone beyond friendly lines and were pinned down by gunfire. Thatcher moved ahead by himself and directed fire to aid the troops. The enemy – only 200 yards away – could see where he was, and fired almost constantly. He stayed in a prone position, only lifting his head to spot shell bursts and determine corrections as necessary. For his heroic action during this battle, Thatcher was awarded the Bronze Star medal for valor.

The 91st played a significant role in driving German forces into Northern Italy, and Thatcher saw heavy combat during the winter of 1944 and the spring of 1945.