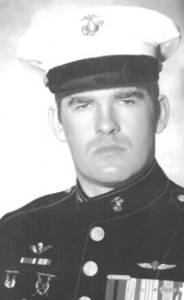 Ever since he can remember, Rick Warke, a Canadian citizen, wanted to follow family tradition and join the military. As Canada was not involved in a war when he graduated secondary school, he and two friends crossed the border to join up. They came to an empty recruitment center in Great Falls, Montana, but Warke waited for someone to show, and they enlisted him in the U.S. Marine Corps.

Warke was sent to Vietnam, in the S-2 Scout-Sniper section of an infantry battalion embarked as a BLT (Battalion Landing Team), elements of which were involved with South Vietnamese Marines during a Song Than operation. One day, they were in bad need of a sniper, so Warke picked up a rifle with only a 3X power scope and assisted his team. Later he went to sniper school and served in special operations, where he would be transported to a “hot spot” and either engage the enemy themselves or support the regular ground forces.

In 1973, Warke left the USMC, and returned to Canada to become an officer in the Canadian military. Desiring more action, he shortly returned to the U.S. and became ship’s electrician on the Navy’s USS Sperry. Even aboard the Sperry, Warke desired more action, so he “hung around” the diving locker. Because he had SCUBA training, Warke was assigned as a diver from time to time on minor missions. In 1980, he transferred back to the USMC as scout team leader. He became a scout sniper, then a sniper instructor and, finally, a chief instructor at the Sniper School, 3rd Marine Division. He was discharged in 1983.

In 1980, as scout team leader for 1st Battalion, 7th Marines, Warke met corpsman James Gifford, who became his lifelong friend. Gifford was diagnosed with ALS (Lou Gherig’s disease) in 1990. Eleven years after the diagnosis, the two friends worked up a plan to move Gifford out of the VA hospital and into Warke’s home in rural southern Utah. In order to do this, Warke had to make considerable adjustments to his home and attend enough training that he could prove to the VA that he was capable of caring for his friend, who was unable to even turn himself to prevent bed sores. The plan was successful and Warke provided round-the-clock care until Gifford passed away in 2008.

In his persistence at getting into the U.S. military, and his steadfast care for a comrade in arms, Warke embodies the famous quote from William Shakespeare, “We few, we happy few, we band of brothers,” and lives by that credo to this day.