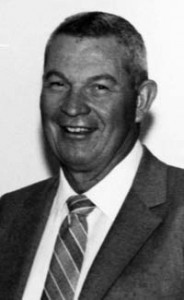 In 1942 Clayton Bushnell was accepted into the Army Specialized Training Program. He was sent to the University of Wisconsin for specialty training, but he and others were converted to infantry after about a year since the Army was low on manpower.

After his training, Bushnell shipped out to the Philippines and served in Company K, 3rd Battalion, 381st Regiment, 96th Infantry Division. The unit fought in the battle of Leyte Island, and then moved on to the island of Samar for a few weeks.

After Samar, they made an amphibious landing on Okinawa, where Bushnell participated in what has been described as the bloodiest battle of the Pacific campaign.

One mission called for Bushnell’s unit to scout an “escarpment” that thousands of enemy soldiers occupied. Company K did make it up the escarpment and into a village, but Bushnell was wounded. A bullet severed an artery near his heart and an artillery round blew him nearly 30 feet downhill. Bleeding heavily, he was carried back to a holding area, where he was piled with other men who were dead and dying. His next memory was of being prepared for burial. He said something to the startled soldier prepping him, and was taken for medical treatment.

At full strength, Bushnell’s unit landed with 252 men. When the battle ended some 27 days later, the company was down to 36.

Bushnell was flown to Guam, then on to Hawaii. He says were it not for a doctor there who used a new treatment on his badly damaged arm it would have been amputated. After the war, Bushnell became an aerospace engineer and was highly involved with the U.S. Space program.