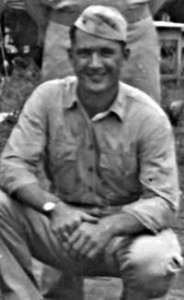 Paul W. Flandro was born August 26, 1921. In 1939 he graduated from East High. Four years later, a week before graduating from the University of Utah and being commissioned an Army Second Lieutenant, he joined the Marines as an artillery officer.

A year later Flandro’s unit, H Battery, 3rd Battalion 10th Marine Regiment, was fighting its way across Saipan. They repelled enemy suicide attacks and fired their big guns point blank into caves to root out the Japanese. They would often follow up with rifles and flame throwers.

When at last the island fell, they watched as hundreds of Japanese civilians, including women and children, leaped to their death off of high cliffs rather than surrender to the Americans.

Aboard a transport ship, Flandro’s unit was in the middle of a fleet that was attacked by kamikazes. Hundreds of pilots flew their explosive-laden planes into the surrounding ships. Flandro, who was on a landing ship tank, believes his ship was spared because the suicide aircraft were after the larger war ships.

Two atomic bombs ended the war in the Pacific. Flandro was assigned to help assess the damage done by the bombs in Nagasaki. He says, “The heat of the explosion bent steel beams 90 degrees…people were dying burned on one side…it was a horrible sight.” Flandro returned home to Salt Lake City with the rank of Captain. He served as the first executive director of the junior achievement program in the Salt Lake City area from 1960-61.