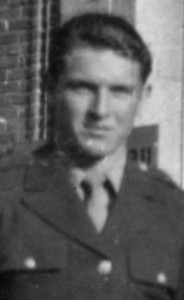 At age 17, Douglas Howard’s parents granted him special permission to join the U.S. Army. After basic training, where he was trained as a quartermaster, Howard was sent to Calcutta, India and assigned to the 191st Combat Engineers, and joined the light pontoon bridge company.

While serving in the China-Burma-India (CBI) Theater, Howard’s company was tasked with building pontoon bridges over rivers in advance of infantry troops. As a precaution, Howard and others from the 191st were issued “blood chits,” messages painted on leather and written in Chinese, to be given to rescuers if the soldiers needed help.

Howard’s combat engineer unit worked on building the Ledo Road, which began in Northern India at Ledo, passed over mountains, and through swamps and thick jungles to connect with the Burma Road for safe passage of American supplies. While working on the road, soldiers of the 191st constantly encountered attacks and sniper fire from Japanese forces. Howard was wounded in one wrist while constructing an infantry foot bridge on the road. He suffered his wound while attempting to save two buddies, but machine-gun fire was so intense that he was unable to reach his fallen friends. He received onsite medical aid from a young medic corporal who had no anesthetic to give him. After being bandaged, Howard immediately returned to his construction work.

His physical wounds healed, but the memories of his buddies who didn’t come home still haunt him today.

The unit returned from the enemy-infested jungles after months of fighting and living on K-rations and monkey meat. They suffered 70 percent casualties from disease and injuries.

Following war’s end, Howard was assigned to a criminal investigation unit in Shanghai, China. His main job was investigating the theft of U.S. Army vehicles sold on the black market.

Among the medals he received for his service, one stands out in particular. His unit received a thank-you medal from the Chinese government. Howard’s was personally bestowed by Chiang Kai-shek.

Howard says he feels undeserving of this award from the University of Utah, and accepts it on behalf of his unit buddies who did not return and those who served in the CBI Theater, often called the forgotten war.