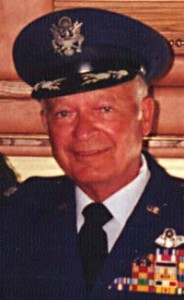 With an uncommon independence, Wallace Humphreys struck out on his own at 17. Shortly, Humphreys found work as a mechanic at Hill Air Force Base, where he was introduced to the B25, the aircraft on which he would base his career.

In 1943, Humphreys joined the US Air Force. At Ft. Douglas, he and a buddy–future Medal of Honor recipient George Wahlen–took the entrance exam for flight school. Humphreys was one of three in his group who passed the exam. He went through basic training, pre-flight school, flight training, aviator gunnery school.

Assigned to the 71st Bomb Squadron—dubbed the “Wolf Pack”—of the 38th Bomb Group, Fifth Air Force, Humphreys was based in Lingayen Gulf, Philippines. Their mission was to find a target of opportunity— factories, sugar refineries, and other infrastructure—and destroy it.

Occasionally, crews were also assigned early-morning weather reporting missions called “milk runs.” Humphreys’ most interesting mission came on such a run, as he and his crew flew back to base. Humphreys noticed a dry dock and destroyer escort at anchor along with a mine, which they bombed prior to attacking the destroyer. The destroyer immediately returned fire, hitting between the right engine nacelle and the fuselage.

As the engine caught fire, hydraulic fuel spewed through the interior of the airplane and fumes permeated the cockpit. When the electrical system began throwing off sparks, Humphreys pulled the external fire extinguisher. Climbing over a mountain, Humphreys ordered the crew to dump everything—including all ammunition, emergency equipment, even handguns—to lighten the heavily armored plane.

Humphreys decided not to take the chance with being taken prisoner in the infamous Philippine mountains and flew to a dirt airstrip about three hours away. On the way, three aircraft from the 38th, 345th Squadron, escorted the crew without radio contact. At the airstrip, Humphreys had to go “straight in,” with no landing gear and only one engine.

Out of a total of 32 missions, Humphreys flew 15 over Japan proper. He says it was very seldom that he returned from a mission without battle damage. Humphreys developed psoriasis and was sent home with just under the required 125 points to go home anyway.

Humphreys was asked to return to active duty as an aircraft maintenance officer in 1953. He replied that he would only accept the assignment on flying status in a jet aircraft. He spent almost five years as a flight instructor. Humphreys was due for an overseas mission. So, when the Air Force moved the school to Texas, Humphreys went to Burtonwood, England—and from single-engine jet fighters to a four-engine reciprocating engine bomber, the WB-50. For nine months he flew weather reconnaissance with the 53rd Weather Squadron.

When the squadron was disbanded, Humphreys volunteered for an assignment in Frankfurt, Germany, where he flew the Weather Wing I.G. team wherever they needed to go in Europe and Africa.

During the Vietnam War, Humphreys went to ground and flight school to become a rotor-wing pilot, and subsequently, one of his “better assignments” was not aboard an airplane at all. It was Phase III testing of the H-53 helicopter.

Near the Laotian/North Vietnam border, a tactical air radar/navigation station on a very steep mountain was overrun. Humphreys piloted his “Jolly Green” H-53 helicopter to help pick up 18 men stranded on the craggy cliffs at about 3,000 feet. As Humphreys loaded the first three soldiers onto the lowered penetrator, they began to settle toward the rocky cliffs due to extra weight and altitude. At that point, all that Humphreys could do was lower the nose and hope to miss the rocks. They did. The hoist swung into place with the three rescued on it 3,000 feet in the air.

Humphreys’ crew dropped two fuel tanks to get over the rocks, returned the rescued men, refueled, and went back for the others. It took four pickups (two for each “Jolly Green”) to rescue the men. They took ground fire on each trip.