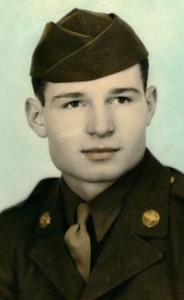 In 1943, near his eighteenth birthday, Bud Mahas joined the U.S. Army Air Corps. He had hoped to become a pilot, but the Army had different needs and trained him to be a turret gunner on a B-17 bomber. In 1944, he was assigned to the 8th Air Force, 351st Bomb Group, 511 Bomb Squadron, stationed in England.

Mahas says on mission days, “The routine was simple: early morning wakeup call, breakfast, briefing (the scary time when the operations officer would pull back the curtain and point to the target for the day). There was always an ‘oh’ or an ‘aw’ or a groan.” He recalls that “take-offs were scary.” They were often so heavily burdened with bombs and fuel, they needed the whole runway for liftoff.

On each mission, Mahas spent six to eight hours cramped into a three-foot turret on the belly of a B-17 in a fetal-like position pointing two 50-caliber machine guns between his legs ready to engage enemy aircraft. At six miles above the earth, it was always cold and oxygen masks were a must. On one mission, his oxygen supply was cut and he passed out. A fellow crew member saved his life by pulling him from the turret and reviving him with an emergency oxygen supply.

Over the target areas Mahas and his crew usually encountered heavy anti-aircraft fire. During a mission over Berlin, their B-17 was heavily damaged. The heavy flak knocked out two engines and the bomber began to lose altitude. As it traversed the English Channel, the pilot alerted them to “prepare to ditch,” at which point the crew members began praying. Fortunately, the B-17 made it to home base and all survived a crash landing. The repair crew counted 280 flak holes in the plane.

Of his time in service, Mahas says humbly, “I was just a soldier doing my job.”