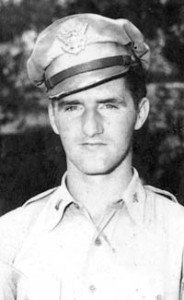 Karl Henry Meyer was drafted into the Aviation Cadet program in 1942. He was trained as a pilot, but being a “people person,” Meyer got lonely flying solo missions and asked for reassignment. As a result, the U.S. Air Corps trained him as a navigator and a bombardier, thus designating him “dually rated.”

After training on B25s, Meyer was commissioned and called overseas to the China-Burma-India theater to support the British. On December 27, 1944, Meyer and four other crew members were returning from a combat mission when their B25 erupted into flames. The pilot decided to land in a field and despite his efforts to maintain power, the engine quit and the plane broke in half just as they were about to land.

Meyer and his pilot were in the front half of the plane, which landed some distance from the back half, where the engineer was pinned next to hundreds of rounds of ammunition and 75-mm cannon shells. Meyer and the pilot pulled the engineer from the wreckage minutes before flames ignited the ammunition. Since Meyer had been “scalped” in the crash, medics had to ask him to hold the skin to the top of his head as he rode back to base. Following a two-month recovery, Meyer flew 27 more missions, for a total of 55 missions in India and Burma.

In 1951, Meyer was assigned to the 3rd Bomb Wing, 90th Bomb Squadron in Korea. Nicknamed the “Night Intruders,” they were to find enemy targets of opportunity and strafe or bomb them. In direct contrast to his WWII experiences, all of Meyer’s 55 Korean missions were at night and over snow. Meyer spent five and a half months there flying B-26s with an 80-million-candle-power searchlight mounted under the wing. His was one of six squadrons that used them in Korea.

Meyer finished out his 27-year career running transport missions to Thule, Greenland, and the Aleutian Islands. He received the Soldier’s Medal – the highest honor bestowed for bravery not involving conflict with the enemy – for saving his engineer from the WWII plane crash. In total, he was awarded 18 ribbons, including the Distinguished Flying Cross, Air Medal with four oak leaf clusters, five battle stars, and other decorations.