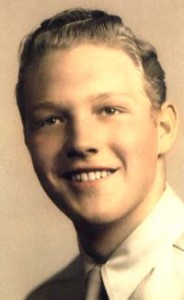 At 17, Robert Monson enlisted in the Army Air Corps and was called to service upon graduation from high school. After training in Colorado and Texas, and an assignment as a nose gunner in Wyoming, Monson was stationed at an airfield near Spinnazola, Italy, in 1944. They were assigned to target German military stations in the former Yugoslavia, Austria, and southern Germany, particularly Munich and Nuremberg. These areas were heavily defended and flak from anti-aircraft batteries was heavy over every target.

During Monson’s fifteenth mission over Austria, they lost one engine and began losing altitude. After jettisoning all possible weight, one small bomb would not release. A crew member manually released it, but it exploded just outside the plane, causing the loss of another engine and puncturing fuel tanks. The crew bailed out, and Monson landed on snow in the Bavarian Alps with about 15 German soldiers pointing guns at him. He was put in solitary confinement for three days in freezing conditions with very little to eat, interrogated, and transported to Nuremberg, where he remained for about three weeks.

The U. S. and British prisoners were forced to march to Moosberg in freezing rain. The trip took them two to three weeks, during which they had to eat greens picked by the roadside. The 15,000 POWs marching with Monson were mistakenly strafed by American P-47s outside of Nuremberg. At one point they were marched for two days and nights without stopping. Many dropped out and were not seen again. At 19 and feeling discouraged and worn out, Monson nearly gave up. They finally arrived at Stalag VII – A, where 110,000 POWs were forced to live in impossibly crowded conditions, food was very poor, and shelter consisted of only a roof. By this time, Monson had lost some 50 pounds.

In May 1945, the POWs heard the explosions and gunfire of Patton’s 3rd Army approaching. Euphoria broke out as the 3rd Army soldiers gave the POWs everything they could possibly spare.