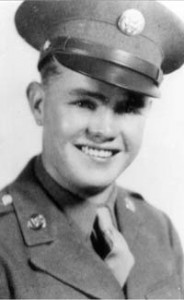 Donald Ward Petersen, from Hinckley, Utah was drafted into the U.S. Army Air Corps in 1943 and assigned to the B-24 Liberator aircraft as a top turret gunner. He was in the 15th Air Force, 49th Bombardment wing, 484th Bombardment Group (H), 825th Squadron. In March 1944, he was deployed to Cerignola, Italy.

On his twenty-ninth mission, a bombing run to Munich, their group of aircraft was attacked by German BF 109s and ME-410s near Innsbruck, Austria. Petersen’s airplane was hit and going down. The pilot gave the command to abandon the aircraft and all crew members bailed out. Petersen landed in Austria on top of a mountain in the Alps overlooking a small town. A man walking with a small boy and carrying a rifle stopped him on his way down. They led him at gunpoint to the village, where he was turned over to the Gestapo. The Gestapo took him by vehicle to Innsbruck, where he saw the rest of his crew, then to Luft Stalag IV in what is today Poland, where he was held as a POW. His entire crew survived, but were captured and interned as POWs for the remaining 11 months of the war.

On February 6, 1945, as the Russian Army was nearing, the POWs were marched from the camp. This began the famous forced march across Poland and Germany. Petersen, marching only with a blanket, was in reasonably good shape when they started. They had to sleep in barns, fields, or simply along the road. They drank water from the roadside gutters and dysentery was a constant problem. POWs were divided into groups of about 300 for marching. They had no way to clean themselves and wore the same clothes through the entire ordeal.

Petersen recalls the day they were freed in May 1945. He was cooking a large horse rib over a fire when someone reported seeing Sherman Tanks. Petersen suspected someone was trying to get his rib from him, so he missed out on the C-rations the liberating British troops gave the POWs. The German guards threw down their weapons and surrendered. The British pointed out the Allied lines about ten miles behind them and moved on, leaving the POWs to make their way back to the front lines. They had been marching for three months and covered over 600 miles in winter.