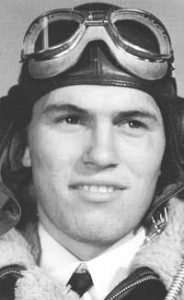 In August 1942, Keith Richardson entered the Navy and was sent to flight school in Corpus Christi, Texas. He received his pilot’s wings in January, 1944 and was assigned to Attu Island, some 1,100 miles west of the Alaska mainland. He flew a Lockheed PV1 Ventura on bombing missions to Paramishu Island in northern Japan, a distance of 1,500 miles round-trip. Because of the extreme distances, the plane was stripped down to bare essentials and outfitted with several auxiliary gas tanks in order to carry about 1,600 gallons of fuel, causing the plane to weigh 3,000 pounds over the recommended take-off weight. Japan had developed radar by then, forcing the plane to fly the last 100 miles just above the tops of the swells in the Pacific Ocean.

On August 13, 1944, Richardson’s plane developed engine trouble. Knowing it would not make it back to Attu, he turned toward the Soviet Union. They came upon a large sea vessel and bombed it, but took fire from the ship, further damaging the engine. Over the Kamchatka peninsula, Russian Yak fighters guided the plane to a Soviet airbase near Petropavlosk. Two other U.S. plane crews were there as well. Because of the Soviet Union’s official neutrality in the war with Japan, the crews were not considered prisoners, but rather “internees.” They lived in primitive conditions and ate poorly.

After one month, Richardson and his crew were flown to a destination in south-central Soviet Union, near the city of Tashkent. During the three months there, they endured chronic dysentery and malnutrition. They were next put on a train to Asgabat in present-day Turkmenistan. After the train was stalled for two days, the internees were told they would be sent back to Tashkent.

Richardson spent another two grueling months at Tashkent. He had lost forty pounds by this time due to malnutrition and lack of adequate clothing in sub-zero weather. Frostbite was a constant threat and took a heavy toll on the men. They were finally taken by truck to Tehran in February 1945 and hospitalized. They arrived in New York on March 8, 1945.