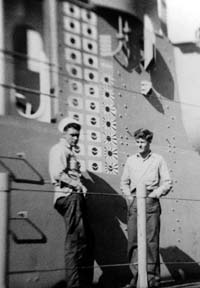 Cal McPhie enlisted in the Navy in 1941. He volunteered for submarine service and was assigned to the USS Finback in the South Pacific. He served on five war patrols in which eight Japanese warships and 27 other enemy vessels were torpedoed and sunk. The Finback was depth-charged on every patrol. During the invasion of Iwo Jima, McPhie’s crew rescued a Navy pilot when they pulled young Lieutenant George Bush–future president of the United States–from the sea. McPhie’s sub also rescued a fighter pilot off Iwo Jima while under fire. Fifty-two American submarines were lost in World War II and 3,505 submarine crewmen died in the war.