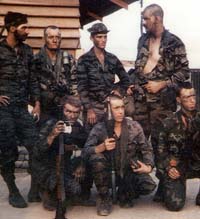 Hilan Jones, a Wyoming native who played lineman for the University of Utah football team, was drafted at age 26 and assigned to duty in Vietnam. He volunteered with the elite 75th Rangers, and served on long-range reconnaissance patrols. Jones participated in ambush and night-fighting operations in Viet Cong territory and on missions to capture enemy prisoners. Upon completion of his tour of duty, Jones volunteered for additional combat in Vietnam and ultimately served three tours. He was later commissioned an officer and retired from military service. Jones is the recipient of the Silver Star, three Bronze Stars and two Purple Hearts.