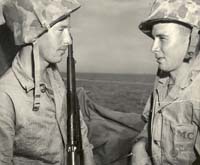 Chris H. Petersen enlisted in the Marine Corps at age 17 and joined the Second Marine Division. He was sent to Saipan and Okinawa for the next 16 months. He initially helped with construction crews building roads and bridges. He was moved to Tinian in the Marianas Islands in April 1945. His mission was to take the high ground, leave a few men to secure it, and move on. The jungles were thick and the hills steep, making it difficult for troops to find the enemy. Tinian was a significant battleground: it was the first place American forces used napalm to burn out the Japanese. Napalm became a major element in U.S. weaponry.

Petersen saw some life-changing battles. At Panzai, he lay at night in a treeline searching the cane fields for movement. He heard machine guns leveling the fields in front of him. He spent most of the night firing his Browning automatic rifle, his assistant running for more ammo. The next morning Petersen saw what he would never forget. He helped in the collection and mass burial of Japanese soldiers for the next couple of days. During this fighting, Peterson was hit in the knee by shrapnel.

This battle allowed the Marines to build an airstrip closer to the Japanese mainland. B-29 bombers could land there enroute to Japan. The “Enola Gay” took off from Tinian for Hiroshima to drop the first of two atom bombs.

Petersen’s next mission took him to Nagasaki to find Japanese military property, seize it, and render it useless. He stayed there until January 5, 1946 when he was released from service.

Four years later Petersen was reactivated and sent to Korea. Conditions were harsh, supplies scarce, and the enemy relentless. He demolished bridges to slow the enemy, rebuilt them when United Nations forces took the offensive, and blew them up again when necessary.

Petersen served 15 months in all, returning home in November 1951.