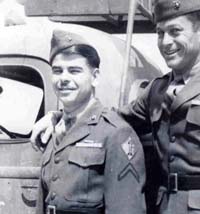 Mack joined the Marine Corps on August 7, 1941 and was trained as a rifleman. A year later, he was in combat in the Solomon Islands. His company was part of the first landing on Florida Island. The next day, they moved to nearby Tulagi Island to remove Japanese snipers who wore camouflage and hid in palm trees. Their fire took its toll. At times the only way of removing them was for the Marines to wait until fired on, and then return fire.

Mack and a portion of the 2nd Marine Division attached to the 1st Marine Division headed to the island of Guadalcanal. Mack took part in the original invasion and the securing of the island. In the Guadalcanal campaign, Marines were always on the offensive, fighting the jungle and malaria as well as the enemy. Facilities were poor. From August 7, 1942, until February 1943, six long months, the island cost the Marines 1,388 men – including those killed in action, dying of wounds, and missing or presumed dead. The Japanese are estimated to have lost 28,580 men. Guadalcanal was a war of “kill or be killed” with possession of the island as the objective. The Japanese were constantly trying to drive the Marines back to the sea and reclaim the critical airfield. The Marines fought back, struggling and sweating through the hot jungle inch by inch. Malaria was a constant problem. Mack was part of numerous patrols and operations on the island. He was eventually sent back to the States, feverish with malaria. He has had numerous health problems ever since.

After his service, Jack settled in Utah with his wife and continued to serve fellow veterans as a quartermaster for the Utah Veterans of Foreign Wars (VFW) for 42 years.