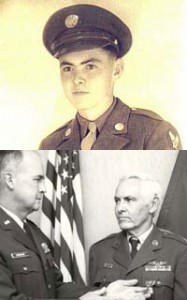 On May 1, 1941 at age 18, Courtney Kruger enlisted in the Army Air Corps and was shipped to Clark Field in the Philippines. On December 8, 1941 enemy aircraft attacked the airfield. Bataan and Corregidor fell and Japanese forces landed on Mindanao. The Japanese announced that if the Americans didn’t surrender they would kill all prisoners. Faced with this prospect, the U.S. forces surrendered. Kruger was sent to a prison camp at Malabalay. He and a couple of buddies hid their communications gear, knowing that if they were caught, they would be killed. They transmitted messages to let their families know they were alive.

In late 1942, Kruger was moved to Davao prison camp where he fell ill with dengue fever, but recovered. He picked bananas and cultivated rice, but the food went to the Japanese. Kruger was allowed 750 grams of rice daily and he boiled weeds to make soup.

His two best friends were put on a ship that was torpedoed with only 83 of 800 surviving. Kruger left Davao on a ship that had hauled coal. About 1,000 prisoners were in a small hold and conditions were unbearable.

They reached Japan in September and Kruger worked in an acid plant until he could no longer lift a shovel. He was sent to sick bay where his daily food ration was cut to 450 grams of rice. As his condition worsened from dysentery and beriberi, his weight dropped to about 65 pounds. On December 21, 1944 the camp received Red Cross packages with vitamin B-1 shots that started Kruger on a slow recovery.

After months of U.S. bombing, a colonel appeared and said the war was over. Carrier planes dropped candy, shoes, cocoa, canned food, cigarettes, and magazines. On September 4, 1945 Kruger was finally free. He recovered from yellow jaundice in Seattle before reuniting with his family after four long years.