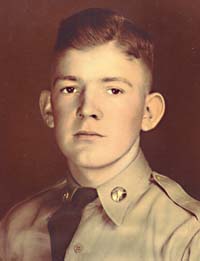 John W. Herndon joined the Army, became a top student in academics and physical training, and was invited to leadership school. He was with Dog Company, 27th Regiment, 25th Infantry Division. Herndon got orders taking him to Korea in July 1950. He saw action from the Pusan Perimeter to the Chosin Reservoir.

It was December, 30 degrees below zero. The ground was solid and the troops found it impossible to dig foxholes. During an ambush, Herndon stood up to see what direction the fire was coming from and a round from a tank flew past him and hit the frozen ground. It didn’t absorb any of the force and John’s legs were severely injured from shrapnel. The explosion also damaged his hearing on his left side, requiring him to be medically evacuated. He spent six weeks recovering, then was shipped back into the war zone for the spring offensive 20 miles east of Seoul. By the battle’s end the whole company was almost completely wiped out; there were only 23 men left. Herndon experienced battle after battle and suffered as he watched men die horrible deaths at his side.

Charlie Company asked to have “the old man” transferred to them for his machine gun knowledge. Herndon was 22 years old and the oldest man left. Shortly after he became a part of C Company, the enemy sent out an air strike on them. They were about to be bombed when a soldier jumped into a convenient water well followed by Herndon and 18 other men on top of them. He relays this story with a chuckle as the visual images fill his mind.

Herndon experienced the bloodiest battles of the Korean War. He went days without sleep, was overrun by the enemy, and survived sub-zero temperatures. After Herndon’s discharge as a disabled veteran, in commemoration of his past, he named his beloved dog and walking partner General Douglas McArthur.