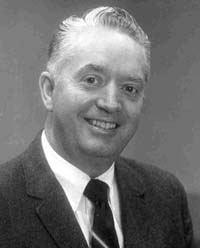 Jonas H. Erekson took part in the invasion of Tarawa in the Pacific. (He also participated in the invasions of Saipan, Tinian, Guadalcanal and Peleliu.) When landing craft could not make it to the beaches because of the coral reefs, Marines were dropped far from shore and slaughtered while wading in open water. In an effort to resolve this recurring situation, the Navy tried something new. They began training an underwater demolition unit to remove the submerged obstacles, which would allow landing craft to get closer to shore. Erekson volunteered for the new program.

These Navy “Frogmen” spent twelve hours a day in the water being trained to work with explosives. Erekson’s weak swimming ability improved dramatically and he was able to swim under water for up to four minutes. The team swam miles wearing only trunks, coral shoes, fins, a mask, and a Bowie knife while carrying 100 pounds of explosives tied to a small air bladder.

As a fuseman, Erekson was first in the water to determine where explosives should be placed. He would then lay cord, set fuses, and swim away as fast as he could.

In February 1945, frogman teams got their first mission: the invasion of Okinawa. Erekson scouted the beach under heavy fire. There were many obstacles – coral reef, rows of underwater pilings, cement tetrahedrons with sharp railroad ties sticking out, and kettle mines.

On March 30 the mission began. After the charges were set, everyone returned to the ship except Erekson and an officer. The tide had started out. Once the fuse was lit the two swam as fast as they could, but clearance over the jagged coral was gone and they had to crawl across the sharp terrain.

The mission was a great success. Landing craft were able to make the beach with no complications. It was Erekson’s last combat mission. He has yet to receive a medal for any of his actions.