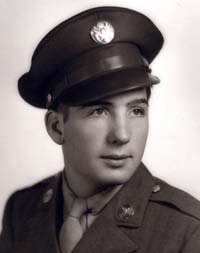 Dell Cox was inducted in 1943 at Fort Douglas, Utah. He trained to be a gunner, assembled with his crew at Kinsel Air Force Base, Florida, and was sent to Leachy, Italy in the summer of 1944.

After flying twelve missions, another crew needed a replacement gunner so they asked Cox and he accepted. As they approached their bombing target, a German shell hit the fuel tank of their B-24 Liberator. One of the engines caught fire and, on the pilot’s orders, the crew bailed out.

Cox was listed as missing in action. But actually, he had landed in a pasture in German-occupied Yugoslavia. A German soldier approached, stopped, and stared at him. Cox hollered, “American!” The German replied, “Oh, Americanski!” and gave Cox a big hug and kiss. Then a man and two girls came from the woods where they had been covering Cox with submachine guns. They were partisans, part of the resistance.

They took Cox and his crew toward the advancing Russians and to safety. They traveled at night for 96 days, surviving red lice bites and yellow jaundice. They trekked through culverts, ditches, and mountains, sometimes in waist-deep snow, surviving on black bread and chestnuts.

Once, when crossing a river, they were ambushed. A man who was in their group stayed behind and fought the Germans as the rest of them escaped. The man lost his life. Another time, as they were crossing a river on a barge, a German plane strafed them, killing the barge operator.

After 96 days, Cox and his group reached Russian lines near Budapest, Hungary. They were put on a train for Bucharest, Romania, where they were treated like kings. After some time there, Cox was flown home and debriefed. He went on to finish a 20-year career in the Air Force, including being activated during the Korean War, and serving on an island off the coast of Vietnam.