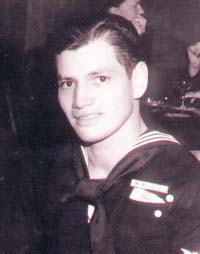 After Pearl Harbor, Carlos Cerna attempted to enlist in the Navy in January 1942, but was turned away because he was color-blind. When he tried to enlist later they overlooked his handicap.

On October 25, 1944 he was standing watch on the destroyer USS Johnston in Leyte Gulf in the Philippine Islands. The men of the Johnston were expecting to be relieved by other ships when the radio crackled with frantic communications between Navy pilots and ships in the area. Soon after, four Japanese battleships, six cruisers, and 11 destroyers came over the horizon, headed directly for the Navy carrier force.

Cerna scrambled to his post as a radar range finder operator. His job was especially critical because of periodic squalls and smokescreens the ships were laying down. He worked steadily during the three-hour battle.

At 0730, Cerna was knocked flat when a Japanese cruiser blasted the Johnston with three 14-inch shells, partly disabling it. At 0950, Cerna heard the order to abandon ship. As he approached the rail, he was knocked over the side by a shell blast. He endured 52 hours in shark and barracuda-infested waters with meager rations and little water. Several times Cerna saw someone pulled underwater by a shark or barracuda. An officer who was nearby disappeared, then popped back up, missing some clothes. Others escaped with bite marks and some didn’t come back up at all.

Throughout the ordeal, Cerna relied on his faith. On the third day, a landing craft appeared. One of the sailors signaled it with a mirror and the survivors were rescued. Cerna received a meritorious advancement to Yeoman 1st Class for exemplary action in battle, along with fourteen of his shipmates.

After his honorable discharge, he worked in the aerospace industry, including the Apollo space program, and at Thiokol.