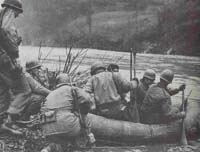 Cloyd O. Bowden joined the Army in April 1944. He arrived in Europe around Christmas 1944 and was part of Company A, 417th Infantry Regiment, 76th Infantry Division.

As a squad leader, Bowden and his men were part of General George Patton’s Third Army that made the final surge into Germany near the end of the war. They traveled from France through Belgium and Luxembourg and then into Germany, mainly by foot and truck.

Encountering heavy shelling and mine fields, the 417th Regiment is credited with being the first unit to cross the Luxembourg-German border to secure a foothold on the east bank of the Sauer River in the Echternach region.

At one point, Bowden, who was a scout for his unit, was moving down a road when a shell slammed into the ground directly behind him. The blast injured both his legs and also wounded another soldier. Bowden was carrying two bandoliers of ammunition for his M-1 rifle, so he removed one and used it as a tourniquet around the leg that was injured most severely. Bowden’s lieutenant came by shortly after and put a tourniquet on his other leg.

As critical as the situation appeared to be, Bowden thought everything would be okay; all he had to do was wait for the medics. He lay there for two or three hours until they finally arrived at dusk to retrieve him. He was first taken to the battalion aid station, then shipped back to Paris for medical treatment. He ended up losing his right leg. Eventually, he returned to Utah. As a result of all these movements, Bowden’s duffle bag never caught up with him and all his possessions and correspondence were lost.

He was released from service April 28, 1946. He and his wife have raised five children, and have lived in Utah, where he worked with the Bureau of Land Management until he retired in 1983.