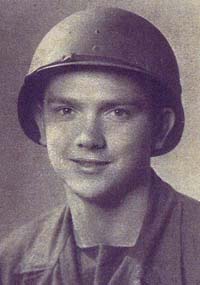 Leland Joseph Winger volunteered for the Army Air Corps in February 1942 shortly after the bombing of Pearl Harbor. He broke his hand during training and his unit shipped out. While he was hospitalized his name was mistakenly placed with a list of Air Corps boys sent to the European ground forces. Instead of air cadet training, he was assigned to Company A, 5th Infantry.

Winger was constantly under fierce enemy fire and had many close calls, from liberating a ­castle belonging to Herman Goering to finding Russian and Polish prisoners locked in boxcars and encountering SS men hiding in attics and closets. He was even fired on by an SS soldier from a second story window in a Red Cross hospital in Schwandorf. On May 5, 1945, his unit was in Austria heading for Wels when they captured Lambach, which was near Gunskirchen Lager, a ­concentration camp. They could smell it blocks away and the stench permeated his clothing. As he was leaving the camp’s courtyard, two male inmates approached him. ”Americaner?” one asked. “Ja,” he replied. One grabbed him and kissed his boots. Winger will never forget the joyous frenzy of thousands who knew the Americans had arrived at last.

The Germans surrendered on May 9. Winger slept all day, all night, and into the next day. “How sweet it was!” he says. He had walked from Normandy through France, across Germany, into Austria, and then east nearly to Vienna where his unit met the Russians. His unit had been farther east than any other Allied unit.

Later, Winger received an official letter advising him he could go back to the Air Force and finish his air cadet training. After walking across Europe in the wet and cold, after sleeping in frigid foxholes, going for weeks without a shower, and eating only K rations, Winger decided not to take them up on the offer.