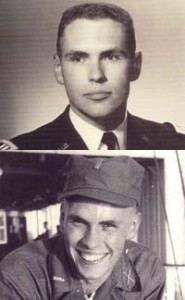 Dick Raybould was originally a midshipman in the University of Utah Naval ROTC after World War II, but changed to the Army ROTC. In 1949 he went to summer training with some emphasis on artillery, and later graduated from the Distinguished Military Graduate Program as a second lieutenant.

In July 1950 he was ordered to Fort Lewis, Washington, twelve days after the start of the Korean War. He was assigned to the 37th Field Artillery, Second Infantry Division, as a forward observer and was shipped to Korea. He arrived in Seoul, South Korea on August 4, 1950. Raybould and his four-man team, with a jeep-mounted radio for communication, supported the 27th Infantry Regiment in the Pusan Perimeter. Raybould was awarded the Bronze Star for his actions in an attack that drove North Koreans back to the Naktong River. Later, he was awarded the Silver Star for action during a campaign in which his company took part in stopping the counter-strike of the North Korean Army. They lost three “recon” sergeants, two radio operators, two liaison officers, and a driver. In November, while at the Chongchon River guarding a ridge line, 3,000 Chinese came down a dry river bed below the ridge and attacked the American positions. Retreating U.S. and U.N. ­forces were pushed into an area called “The Gauntlet.” U.S. forces realized they had greatly underestimated the resistance capability of the Chinese and tried to blow through the road block with tanks. The tanks were successful but they lost many men.

In January 1951 Raybould contracted hepatitis and was sent to Japan, then to Walter Reed Army Hospital for 18 months during which he was promoted to first lieutenant. Following several stateside assignments, Raybould was promoted to captain and sent to Europe where he worked as an intelligence officer in tactical nuclear support. In 1964, he went to Southeast Asia to train the Vietnamese army and worked in a propaganda unit. After his promotion to lieutenant colonel, he spent the last five years of his career as chief of programs for Army research and development.