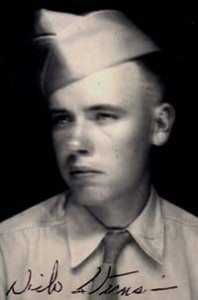 In high school, Richard L. Stimson learned about the Army Specialized Training Program (ASTP), which allowed high school students with excellent grades to attend college early. Upon acceptance to the program, Stimson was sent to Stanford University for engineering school.

Later, when halfway through basic training at Fort Benning, ASTP was cancelled and most members were inducted into the Army as infantrymen. Unfortunately, digging foxholes would be the extent of Stimson’s engineering career. He became part of the 100th Infantry Division and was sent to the Vosges Mountains in France.

As a result of the German attack in the Ardennes, which became known as the Battle of the Bulge, U.S. General George S. Patton moved many troops to that location, depleting the ranks in Stimson’s area. The German forces learned of this advantage and attacked. On January 6, 1945, Stimson’s 398th Infantry Regiment was ordered to the front.

On January 8, as he was walking down a trail, a mortar round exploded behind him. He was injured in the pelvis and unable to move. A buddy, Billy Kidd, bandaged Stimson and got him into a foxhole for the bitter cold night. The next morning Kidd helped Stimson back to his unit for medical evacuation. Kidd was killed two days later before Stimson had an opportunity to thank him.

Hospitalized first near Cherbourg, France and then in England, Stimson was awarded a Purple Heart. About two weeks later, he was finally able to walk again.

Stimson eventually returned to the States. Forty years after his discharge he received a package in the mail containing a Bronze Star to add to his Combat Infantryman’s Badge and several campaign ribbons.